When I fully decided to breastfeed my child, I had such a perfect picture in mind. I thought she would just latch on and drink while I would sit back and enjoy our bonding time. I thought it just came naturally.  I was shocked when it didn’t go exactly like that! You may have read my post where I mentioned that I didn’t get to feed my baby until about four hours or so post delivery.

When I finally held her to feed her, I felt awkward. I was new at breastfeeding:- maybe that’s why it felt odd to me. I wasn’t sure that the positioning was quite right and my hands didn’t feel very comfortable. I was just hoping she was latched on and getting something.

Prior to my delivery, I attended a couple Lamaze classes to help prepare me for the experience. One of the classes dealt with different breastfeeding positions. Unfortunately, I wasn’t prepared for what I was soon about to face.

I’ve heard it said that “babies feed often”. In my mind, often was about every 3 or 4 hours so I wasn’t too worried about losing much sleep. Even when I went into recovery, my daughter didn’t feed four about 4 hours after our first feeding. Then it all came crashing down on me; every 45 minutes to an hour! I was not prepared for that at all. Looking back now, I think she was catching up on some sleep and tricking me into thinking that this journey would be smooth.

Every 45 minutes…like clockwork… My exhaustion when through the roof. I was a walking zombie. I was just a milk machine. The first few weeks, I felt like my days were spent with a tiny human attached to me 24/7. The nights were worse. She would be feeding every 30 minutes. As soon as I thought I got a little break, she would be searching for her milk.

Every evening at about 4 pm, my nightmare began. My daughter would be forever fussy and forever feeding. They call it cluster feeding. During those days, I felt as if I was going to lose my mind. I had an oversupply issue, but I began wondering if my baby wasn’t getting enough milk.

I just couldn’t get her to settle for a long period. Any chance I got to shower, I would break down in tears. It was too much. Thankfully, it eventually got better.

As a new mom, I wish someone would’ve explained exactly what constant feeding meant. Or at least the why behind it. Then I could’ve been a little more mentally prepared.

When babies are born, their stomachs are very small which means it takes very little to fill them. Breastmilk is easily and quickly digested which results in baby getting hungry faster. 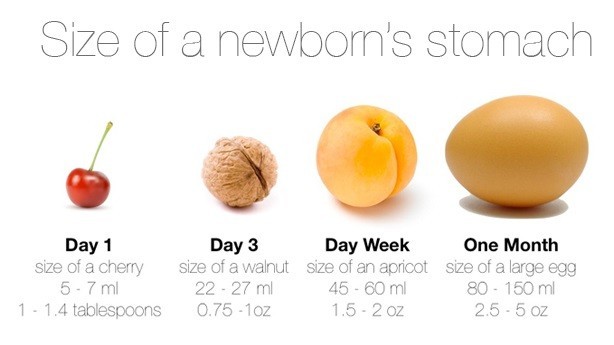 Hence, it seems like all you do is feed your baby.

As baby’s stomach gets bigger, he takes in more at each feeding and is able to go for longer periods between feedings.

With constant feeding comes sore nipples. There was hardly any time between each feeding for my nipples to get a proper rest. After day two of breastfeeding, I was ready for some type of relief. My daughter had a very aggressive suck in addition to feeding frequently (ouch). Thankfully, I didn’t experience cracked nipples.

I had procrastinated when it came to buying a nipple cream so I was in the hospital with absolutely nothing. But guess what? Breastmilk actually makes a cost effective nipple “cream”.

After each feed, I hand expressed a little milk and rubbed it into my nipples until it was dry. This was very soothing at first. When I got home from hospital, I used coconut oil. Other people swear by lanolin nipple cream.

Sore nipples are a very common breastfeeding issue and can be the result of a bad latch so be sure to check that your baby is latched on correctly.

Finding A Good Position Is Important

Finding a good breastfeeding position is key to getting a good latch which reduces the chance of experiencing nipple soreness. Not only that, it takes the strain off your muscles and helps you relax for a better nursing session. Having a nursing pillow helps getting and stayin in position easier and alot more comfortable.

I thought that I just had to put my baby on my nipple and she would suck all the milk she wanted until she wanted to stop. I played around with different breastfeeding positions for a while before I found my “go-tos”.

This is the most painful thing I have experienced while breastfeeding. The day after I came home from hospital was when it began. My milk came in before I was discharged from hospital but I never got the “full” feeling. Whenever I was checked, milk squirted out so I knew it was there.

My first night home was like any other night after the birth of my daughter; feeding around the clock. But in the morning, something was very different. My breasts were extremely swollen. Not just my breasts, but under my arms. And it was painful.

I didn’t know what was happening so my husband and I were searching all over the internet and we called two medical facilities. One facility scared me. When I explained what was happening, the nurse, in a rude tone, told me that I needed to “get that milk off” or it would make me sick. What? Sick? Why? What’s happening? I went into panic mode.

My perfect plan to exclusively breastfeed my daughter seemed to have been falling apart quicker than it started. The second hospital I called was a lot friendlier and told me what was happening and what I could do to relieve it. It didn’t include quitting breastfeeding. I was relieved.

My cousin, who is a nurse, came over when I called her and told her what was happening. She made sure I didn’t have a fever and she got to work trying to soften my breasts.My breasts were hard and lumpy and the slightest touch was extremely painful. My day was filled with “ouches” and lots of tears.

As the day went on, I was trying to express milk and feed my baby as often as I could but the milk seemed to be filling up faster than it was being removed. The pain was overbearing. It took about 7 days before things leveled out for me.

Oversupply is a thing! I’d spend a lot of time worrying that I wouldn’t have sufficient milk for my daughter. Meanwhile, my body had other plans.

I can’t say I wasn’t happy to hear I had an oversupply because I was. But there were some issues that followed. One being that my daughter was getting gassy a lot.

With the help of my breastfeeding specialist I was able to work around my oversupply and help my daughter be gas-free. I’ll probably write a more in depth post about this.

With oversupply came leaking. If I knew I would be such a heavy leaker, I would’ve stocked up on more breast pads. I ran through two boxes in less than two weeks. It seemed like the slightest thing caused my milk to flow at not so convenient times.

During the night I would wake up with my clothes and sheets soaked in milk. Milk was just everywhere.

Whenever I left home, I had to ensure that I packed at least 3 extra pairs of breast pads and an extra top. It was a given that at any time, my milk would start dripping and I would end up smelling like a walking milk machine. That was very embarrassing at times.

Can you imagine everyone else around you smelling fresh and clean while you just marinate in a fresh milk bath? I wouldn’t change a thing about it though because it is all for a good cause.

Although I was taken by surprised by these situations, I’m happy that I always found a way to work through them and continue on my journey.

What was the start of your journey like? What are some things you weren’t prepared for? Leave your comments below and let me know!

Welp! I want to quit breastfeeding!

Feeding A Newborn Baby- The Battle of Boob and Formula